A New Family Takes Over - The Retterers 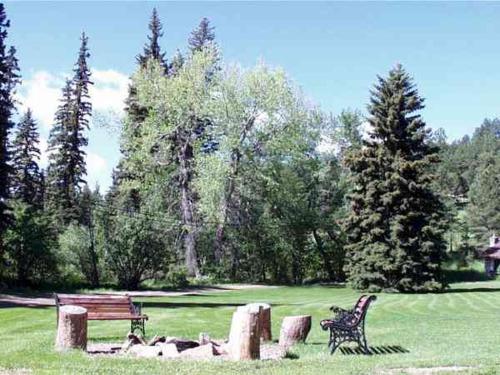 In 1964 the Bauers sold the Chalets to their daughter Maureen and her husband, Paul Harrison, who operated the inn until 1995. It was in 1995 that the current owner, Sue Retterer, and her late husband, Ron, purchased the property for their semi-retirement. As the two couples became friends they found they had much in common. Both couples met while attending the University of Denver, all were hockey fans and they all loved the Evergreen mountains.

After ten years in southern California where Ron had been in the construction industry and Sue was in corporate management the Colorado mountains were calling them back to where they had raised their two sons. And their sons and Jeff's new bride Dana came back to Colorado with them to help run Bauer's Spruce Island Chalets.

Both Dave and Jeff as well as their father were in construction and the itch to remodel and improve didn't take long to set them on their way to putting their touch on the venerable Bauer's.

The garages in what is now the fourplex were converted into the current studios in 1996. Evergreen lodging availability at that time didn't meet the demand and potential guests were begging for any place to lay their weary heads without having to drive down the hill after a wedding or reunion or to get away from the heat of Kansas, Texas and other summer hot spots.

During the more than two decades the Retterers have owned and operated the inn, they have made some improvements including the large play structure on Spruce Island, a remodel of the original Willows cottage, and various upgrades to baths in addition to the two studios.

The Kinnikinnik has been remodeled as the manager's cabin. An owner’s cabin was developed from what had been a carport and utility room for the four-bedroom Blue Spruce chalet.
A fire pit was added so the guests could enjoy the cool evenings gathered around the glowing embers, sometimes bringing their guitars for a sing along while the kids roast their marshmallows.

Another change but not by choice are the empty flower boxes. You may notice them and wonder why. It all is the fault of our elk. Both the elk and deer have made this Evergreen gem their frequent gathering spot sometimes spending entire afternoons in what we humans like to call the picnic area.

When asked how Mildred was able to keep flowers in the boxes with all the elk that inhabit the area, Maureen Harrison described the Evegreen area of long ago when the elk stayed in the wild, which is now developed into housing. Because of all the development in the area they find our grassy picnic area and raspberries and other flora as well as the pond and creek for bathing as well as drinking very enticing. They especially like the flowers that we tried putting in those flower boxes. But we gave up after we found that the elk even stripped the leaves from our silk plants.

Of course the deer like to nibble the new growth of the shrubs so you'll see them on the hillsides more than on the lawn.
And as the years have gone by the family changed. Dave married Clare at Bauer's Spruce Island Chalets in 1996. And they now have three children who call Bauer's home. Dana and Jeff enjoy life in Evergreen with their two sons who now attend Evergreen High. We lost Ron in 2006 and his companion, Sophie who was the German
Shephard who was the mascot of Bauer's shortly thereafter.

Sue now spends her winters in sunnier climes so Dave and Clare make sure guests are taken care of not only in the summer but all year long. Jeff and Dana and the boys help out as needed. Thanks to both sons and their families who have taken their turns managing the property and continue to assist Bauer's Spruce Island Chalets remains one of the oldest continuously operating family businesses in Evergreen ready to welcome guests both old and new.

As a note, some people have recommended changing the name, which some find cumbersome in the current environment. After reading the history of what we can't help but refer to as "Bauer's" you may understand why the name appears here to stay.